The Creatures Have a Secret

At their heart, Rockford’s Rock Opera’s stories and audiobooks are about extinction and the amazing creatures our world will lose if humans don’t think again about how we treat the natural world. But, losing creatures to extinction isn’t just sad, it could deprive the world of important answers.

This section deals not only with extinction, but also with some of the many significant scientific discoveries that have been made as a result of the study of animals and plants – discoveries that simply wouldn’t have happened if they had been extinct.

99.9% of all the creatures that ever lived may now be extinct – extinction seems to be a natural part of evolution.

But, right now, largely because of human activities, scientists estimate that as many as 137 species are becoming extinct every day.

How many medical, engineering and other breakthroughs might we lose if we allow more life forms to become extinct, before their time, as the result of human short-sightedness? 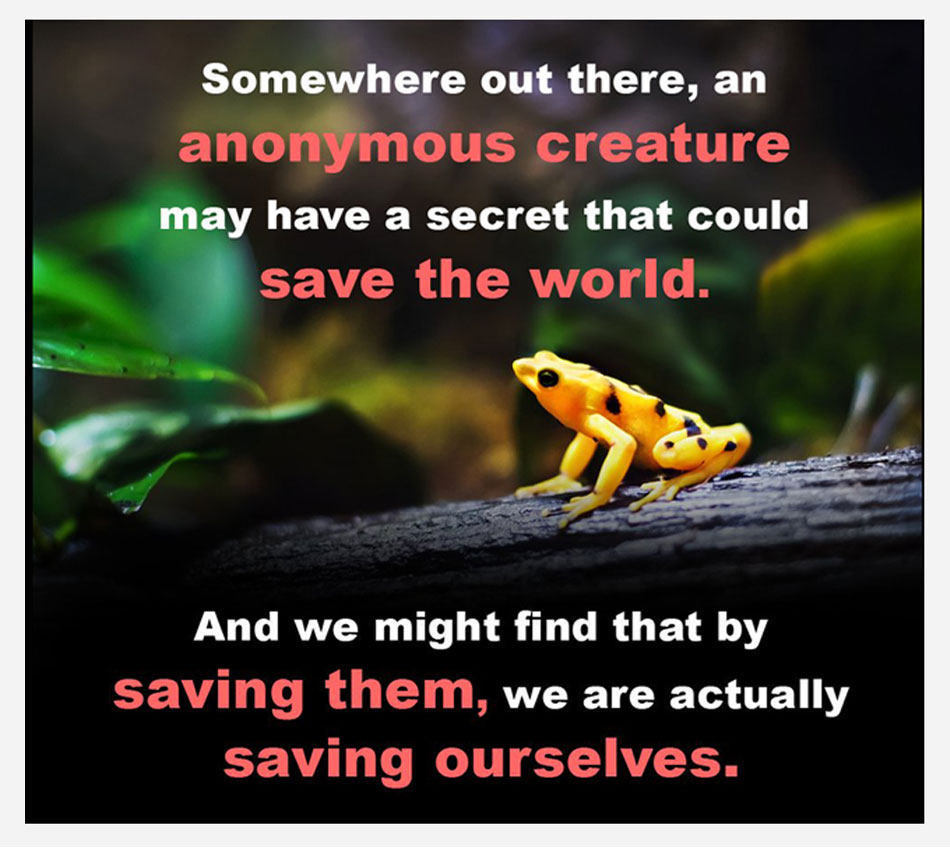 Life on our planet has changed constantly over millions of years, and the odd thing is – extinction seems to be an essential part of the process.

Extinction:
The dying out of a species of any living thing; its complete disappearance from earth.

Some new species evolve as others die out, but the turnover is usually small. We can make a fairly good guess at how often a species appears and disappears by studying the Fossil Record. It seems most species last for around 5 million years before they become extinct.

The Fossil Record:
Shows all fossilized plant & animal remains and their placement in their original rocks.

That spectacularly well-adapted predator, the shark, may have been around for almost 100 million years. We have found fossilized Great White Shark teeth dated to 65 million years ago. BUT…

Since human civilization began, the rate at which species are being lost has rocketed. Many biologists estimate that over half of the species on earth will disappear within the next 100 years.

So far, biologists and naturalists have identified around 1.5 million species of plants and animals, but this is a mere fraction of the total. Millions more have not been found, and thousands of these could be becoming extinct every year without anyone noticing. Bill Bryson, in his book, and excellent audiobook, ‘A Short History of Nearly Everything’ suggests that only:

‘ONE bone in a BILLION’ ever becomes fossilized!

So, out of the estimated 30 billion species that have lived on earth since the beginning of time, only 250,000 will be in the Fossil Record. We can only imagine what the other 29,999,750,000 creatures were like!

It appears from the Fossil Record that several times in the past there have been mass extinctions – periods in which a large proportion of plants and animals have died off.

All were caused by catastrophic events, such as a colossal meteorite impacts, or volcanic explosions.

The impact of man is having the same effect. There may have been as many as 20 such mass extinction events in the 4.5 billion years of Earth’s history. Most were so long ago that the evidence in ancient rocks is hard to find and not always clear, but most biologists agree that we are in the middle of another mass extinction right now. Different species are disappearing for different reasons, but ultimately human activity is the cause.

Our Effect on the World

It’s quite likely that even as far back as 15,000 years ago, hunting by humans contributed to the disappearance of Woolly Mammoths and Cave Lions in Europe, and most of the large mammals of North America. Ever since then, and through the beginning of farming 10,000 years ago, to the creation and expansion of modern industry, we are having an ever greater effect on the natural world – and that means more extinctions.

As we clear huge areas of forest to create farming land, or use ‘better’ technology to find more fish for our trawlers, we see particular species becoming rarer and rarer, and eventually disappearing.